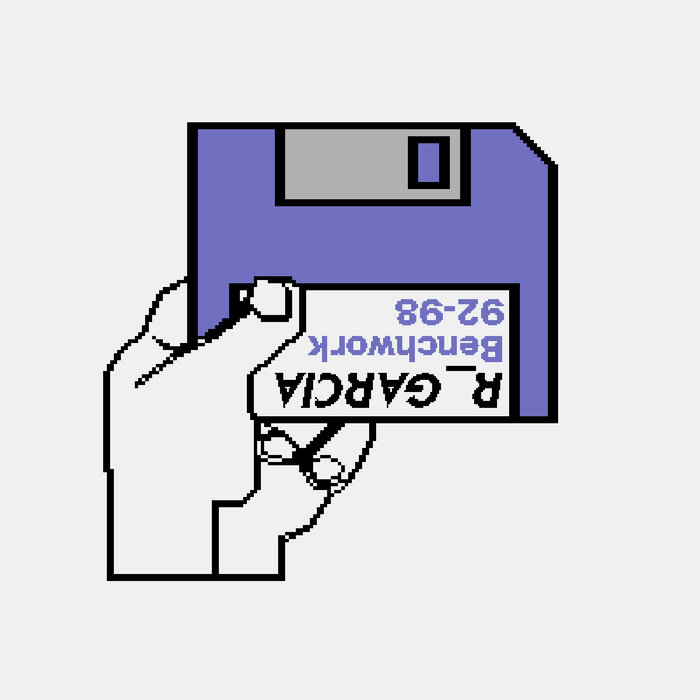 Rescued from a storage bin of dusty cassette tapes from the 1990's, Benchwork is a low resolution image of the big bang that created R_Garcia's music universe.

This hissy, grungy and warped ensemble was created using Fast Tracker II (PC DOS), OctaMED Studio (Amiga) and captured onto a cassette tape directly from the computers, using no recording consoles or effects. The tracks were given a thorough re-mastering by R_Garcia in 2012 and are in the best shape of their long, reclusive lives.

More than mere "cracktros," the 12 tracks of BenchWork invoke an unapologetic mix of demoscene frugality, chiptune crunch, and classic IDM embellishment -- all parts of the final formula for the modern R_Garcia sound.

Fans of Garcia's guitar/vocal output will likely be less stimulated by this collection, as it is instrumental, raw, and lacking in live performance.
However, fans of Garcia's 2000-2005 catalog will find much to savor in the frenetic drums, catchy melodies, and humorous gallop of this music.

Consider this the birth of the R_Garcia multiverse; the genesis of a musician in perpetual transition; a glorious pile of cigarette-stained home recordings for one and all to enjoy after 20 years of storage in a pungent box.